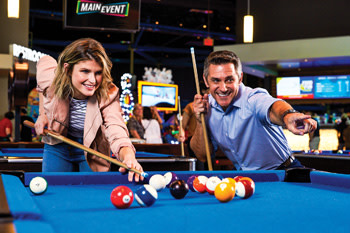 What Is Billiards and What Is Its History?

Billiards is one of the most popular games in the world today. You’ll see it played on TV and in movies, see tables set up in bars and hotels, and it’s very likely that you’ve tried your hand at it yourself at some point. Billiards is often associated with dark rooms and betting, but people play billiards for various reasons. Let’s learn what billiards is and about its history.

Billiards isn’t actually one game. There are many variations under the billiards umbrella. Some of these include:

These games require varying skill levels, and some may take longer than others, so they are popular among different crowds.

The History of Billiards

You may be surprised at how old billiards is. One of the oldest references to billiards is in Shakespeare’s play, Antony and Cleopatra, from 1674. But the game is actually older than that, dating back to the 1300s. Let’s learn about the history of billiards now.

When Was Billiards Invented?

Billiards began in the 14th century as a game similar to croquet. The first records of billiards games were in the 1340s. These games took place in France, but the game really gained popularity in the 15th century when wealthy nobles began playing throughout Northern Europe. The nobles’ affinity for the game is why it’s still called the “Noble Game of Billiards.”

As we mentioned, billiards was invented in France. Besides the records of the 14th-century croquet-like game, we know this because the name “billiard” is derived from French. The cues were called “billiart,” and the ball was called a “bille.” No one knows who the exact inventor of the game was, but there have been plenty of contributors to the game throughout history.

In the early 1800s, Captain Mingaud invented the modern cue tip and masse shots while imprisoned for conspiracy in France. Then, John M. Brunswick created a table factory in 1845, which would become the largest billiard company in the world, called “Goliath.” Then, in 1869, John Wesley Hyatt created the composite billiard balls we know today. This was made possible by the discovery of celluloid in 1869.

Why is Billiards Called Pool?

You may have heard the term pool associated with the act of a group of people betting together. Back in the 1800s, there were “pool rooms” where people would come together to bet on horse races.

After the Industrial Revolution, billiard tables were installed in these rooms so clients could pass their time during these horse races. Soon, people started calling billiards a “pool game.” These pool rooms are reason billiards is so popular today.

How Pool Evolved In The 20th Century

Billiards was booming at the beginning of the 20th century. During this time, cue sports tournaments were held annually. Billiards continued to thrive throughout both World Wars, particularly among soldiers and veterans. However, after WWII, the game began to decline along with all aspects of the entertainment industry.

However, in 1961, the game had a comeback due to Paul Newman and the release of The Hustler. After this movie, new pool rooms were opened in the US. After Newman played a hustler again in The Color of Money, directed by Martin Scorsese, in 1986, even more pool rooms opened up.

Pool In The 21st Century

Nowadays, you can find pool anywhere. Look on TV, YouTube, Twitter, and Facebook; you can find groups and channels dedicated to the game along with digital versions of some of the more popular variants. There is even a drive by the World Professional Billiards and Snooker Association to get snooker included in the Olympic Games. Billiards has been part of the World Games since 2001 and may one day be included in the Olympics.

Get In On The Game For Yourself

Now that you know the history behind the game, you can try out your hand at billiards for yourself. Whether you’re already an expert or just getting started, Main Event has everything you need to have a night of fun in the billiards hall. Food, drink, and atmosphere are not in short supply at your local Main Event. Find your nearest location and head down to practice your shot and sink some balls.