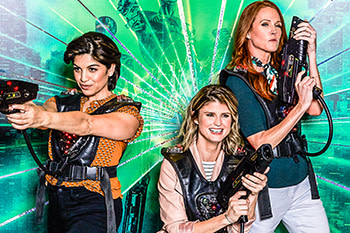 The History of Laser Tag

Laser tag is a favorite among people of all ages. Families and friends can play together on a team, individually against one another, or divide up to face off in smaller groups. Laser tag has been around for decades, but have you ever wondered how it evolved? The game has some history, and to learn more about it, we will have to dive in for Laser Tag History 101.

During the 70s and early 80s, the United States Army developed technology that harnessed infrared transmitters and detectors for training soldiers for combat. This tool is called MILES, which stands for multiple integrated laser engagement system, and is still used by the army today. This combat training tool would become the laser tag game we know and love today!

The first laser toy ever released was the Star Trek Electronic Phaser Gun, created for marketing Star Trek: The Motion Picture. It used an infrared light as well with a corresponding sensor. This toy was manufactured by a company called South Bend, a subsidiary of Milton Bradley.

George Carter III began the process of creating the very first arena laser tag system in 1982. He thought of this idea back in 1977 when the movie Star Wars inspired him. He wanted to create a scored version of the Star Trek phaser gun game and opened the first Photon center in Dallas, Texas, on March 28th, 1984. This led to Carter being honored by the International Laser Tag Association on November 17th, 2005.

Laser tag toys began to take off in 1986, starting with Photon toys. Later, Lazer Tag toys came out from a company called Worlds of Wonder, and similar toys came out from various other companies. However, as people’s love for games wore off, these companies, including Photon, went out of business later in the 80s.

Laser tag toys may not be as popular, but laser tag arenas are certainly here to stay. These arena based games exist in many varieties worldwide and are wildly popular among both kids and adults.

The game has not changed much since its inception. It’s a unique combination of a futuristic game and a blast from the past when you enter a laser tag arena.

The United States Army! It was originally used for combat training. As far as the arena based laser tag game, that was George Carter III.

When was laser tag invented?

The US Army began using laser tag for combat training in the 70s, but it did not take off as a game until 1984.

Where was the first laser tag arena?

What was the peak of laser tag?

Laser tag had an explosion of popularity in the 90s, when arcades were at their peak.

Head on Down to Main Event and Experience Laser Tag for Yourself!

Main Event’s laser tag arenas offer multiple levels and all kinds of hiding spots and bases to defend. We offer all kinds of games and activities, so there’s no shortage of fun to be had.

Check out your local Main Event to schedule your birthday party or event, or just head on down for a fun day of laser tag! You’re sure to have a good time.