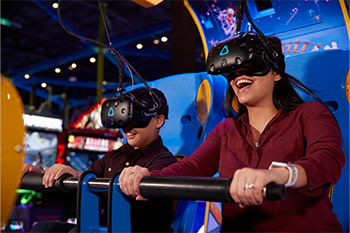 The History of Virtual Reality

When you think of virtual reality in modern days, you likely think of its uses in gaming. Virtual reality has exploded in popularity in the gaming industry, with rapid advancements in the available technology.

PlayStation’s newest virtual reality headset, the PlayStation VR2, is widely anticipated and set to release at the end of 2022. However, virtual reality has many uses beyond gaming and has a long history dating back to the 1920s. Let’s learn more about virtual reality by diving into what it is, what it offers, and how it came to be.

What is Virtual Reality?

What is the Difference Between Virtual Reality and Augmented Reality?

Augmented reality (AR) is also a popular technology these days. This enhances a user’s view of the real world by adding digital overlays that incorporate artificial objects. With AR, the user views the world directly or through a camera, then a feature is added to that vision. On the other hand, in VR, a whole new scene is created, and a virtual experience is built from scratch.

What are the Uses of Virtual Reality?

Virtual reality isn’t just used in gaming. It’s also used worldwide across various industries to accomplish many different tasks. You may be surprised at some of the uses of virtual reality technology.

The history of virtual reality is long and exciting. The technology has grown significantly over the years, and we will follow its journey from the very beginning.

In 1929, Edward Link created a flight simulator he called the Link Trainer. This flight simulator was entirely electromechanical, and a small motor-driven device mimicked turbulence and disturbances. The US military needed safer ways to train pilots, so they bought six devices for $3,500. In World War II, over 10,000 of these trainers were used for training and improving skills.

Stanley G. Weinbaum published a science-fiction story called Pygmalion’s Spectacles in the 1930s. The tale actually predicts the creation of virtual reality. In this story, a pair of goggles allows the wearer to see a fictional world and experience it through smell, taste, and touch. It brought the idea of virtual reality to life.

In 1960, Morton Heilig came out with another invention: the Telesphere Mask. This was the first head-mounted display.

In 1991, VR entered the gaming industry with Virtuality Group arcade machines. With these machines, players would wear VR goggles and play either multiplayer or single-player games.

In 1997, Georgia Tech and Emory University started using VR to treat PTSD in war veterans. This is still a common treatment for PTSD today, in which veterans are submitted to controlled exposure.

Get the Best VR Experience

For a state-of-the-art VR experience, there’s nothing better than Main Event’s Virtual Reality Arcade. We have 4 virtual reality experience like nothing you’ve seen before. Our Star Wars Lightsaber Dojo lets you face off against Darth Vader himself, along with stormtroopers and droids. Or you can play Hologate, a multiplayer game that takes place in a whole different world. Check out our virtual reality games and visit your local Main Event to dive in!